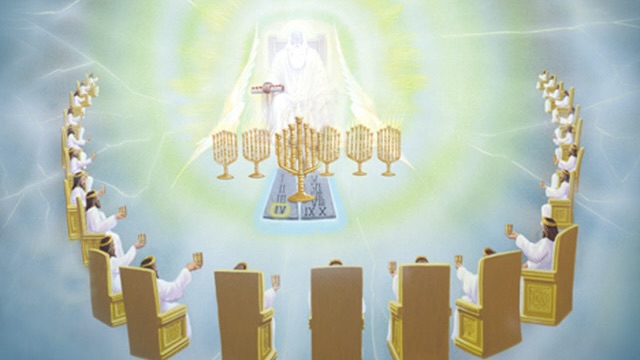 The initial introduction has been given in chapters 1-3 in which Jesus has introduced Himself and given a brief panoramic survey of church history from the early Christian Church in AD 31, down the corridor of time to these last days during the time of the Investigative Judgement prior to His glorious return.

What now follows is apocalyptic drama in the Great Controversy between Christ and Satan. These prophecies in Revelation are repetitive rather than in successive order. Their objective is two-fold:

(1) To reveal God’s justice in dealing with the sin problem, and thereby vindicating His character throughout the realm of the universe.

(2) To assure His faithful saints of the ultimate victory over Satan that He will achieve and share with them.

“After this” – this is not a reference to a chronological sequence following the panoramic survey of the successive periods of the Christian Church, but what were, at that time, future events – i.e. “things which must shortly come to pass” – Revelation 1:1.

“Door opened in heaven”: Greek word is en, meaning “inside” (as opposed to eis meaning “into”). It opened into the Most Holy Place.

John was invited to go up there and he immediately found himself in the throne-room of God in the Most Holy Place. John was about to view a similar scene to what Daniel was shown in vision: the Pre-advent or Investigative Judgement – Daniel  7:9-14.

Ezekiel had a similar vision of the throne-room of God – Ezekiel 1:26-28. The throne that Daniel and     John saw was not Christ’s “throne of glory” (Matthew 25:31) but “the throne of grace” (Hebrews 4:16). The former belongs to His Kingdom of Glory but this latter belongs to His Kingdom of Grace. Great power and majesty are manifested from the throne of God (v. 5). The Seven Lamps represents the perfect Holy Spirit (c.f. Revelation 1:4).

24 elders were seated on these thrones: “The Lord of hosts will reign on Mount Zion and in Jerusalem, and before His elders He will manifest his glory” – Isaiah 24:23 (NRSV)

Who are these 24 elders?  One thing is for sure: they were redeemed from the earth – Revelation 5:9.

Certain saints who were resurrected and ascended with Christ to heaven: Matthew 27:50-53; Ephesians  4:8. They are the antitype of the 24 courses of the Levitical priesthood. Just as they ministered before God in the earthly sanctuary, so John beholds them ministering in the heavenly sanctuary. They are clothed in white raiment – i.e. Christ’s righteousness (Revelation 19:8).

The vision portrayed them with the features of a lion, an ox, a man and a flying eagle – what do these symbolize? Ezekiel had a similar vision in which he saw cherubim (Ezekiel 1:5-26). Lion denotes strength; Ox suggests perseverance; Man denotes intelligence; Flying Eagle represents swiftness.

The Typology of the Mosaic Law bears significance in this vision.

The 24 elders were chosen representatives from the human race. Jesus, as the “firstborn among many brethren” (Romans 8:29) is the elder Brother of the family of the redeemed. He has travelled the way before us and identifies with us brethren (Hebrews 2:11). As our High Priest, Jesus was “anointed with the oil of gladness above his fellows” – Hebrews 1:9. These fellows are those who arose with Him from the grave – i.e. the antitypical wave-sheaf offering as representing Jesus Christ Who restored life during the Feast of Unleavened Bread (time of Pentecost) and when the Holy Spirit was poured out, marking the beginning of the NT Church. Jesus is the “First Fruits of them that slept” – 1 Corinthians 15:20. 24 priests appear with Jesus in His High Priestly ministry, thereby fulfilling the typology portrayed in the 24 courses of the Levitical priesthood (1 Chronicles 24:3-19; 2 Chronicles 8:14).

The Focal Point in the Judgement Scene now changes . . .

The contents of this scroll are so excessive, they are written on both sides. What is this scroll?  Undoubtedly it concerns our redemption because when the scroll is taken, the 24 elders burst into praise about their redemption (vs. 8-9).

The decision of the Jewish rulers to reject Christ was registered in this scroll (c.f. EG White, Christ Object Lessons, p. 294) indicates that its contents include more than just the period of the Christian era. This scroll is to do with our redemption – it is therefore a book of human destiny but it should be noted that while redemption has its roots in the past, its full realization rests in the future. Our inheritance is a future assurance – Ephesians 1:13-14. The gift of the Holy Spirit is the pledge of that inheritance. While the inheritance is pledged, it has to be repossessed from its usurper and made ready for its eternal citizens. This cannot be accomplished until the Judgement has taken place.

“Who is worthy” – not a question of strength, position or dignity, but of victory and moral worth. “To look thereon” – i.e. to read and reveal its contents.

Ancient laws and customs given to the Hebrews included a ‘Year of Jubilee’ when all Hebrew slaves and lands reverted to their original owners. This provision prevented a few wealthy men from creating a small group of landowners and a large landless class. Sale of land really would amount to a long-term lease.

However, property could be reclaimed beforetime if the claimant could validate his property and pay the redemption price. The repossession or redemption could only be negotiated by the “goel” – i.e. “a kinsman redeemer”. An example of this is found in the case of Ruth and Boaz, her nearest “goel-kinsman” (Ruth 4:1-13). There would be two copies of the legal document:

“For the manner of writing the contract, he who was to buy the ground wrote two instruments [documents]; the one to be sealed with his own signet, the other he showed unclosed to the witnesses, that they might subscribe and bear witness of that which was written. This, the witnesses did subscribe upon the back of the enclosed instrument,” – Weemse on the Judicial Law of Moses, chapter 30.

The application to this vision is that Satan claimed this world and has abused it over the centuries, but the “Title Deeds” have been awaiting the time when our Goel-Redeemer, our Kinsman, Who identified with us through His incarnation, would take the sealed document and repossess the lost inheritance.

There are 3 facets of a judgement: (1) The investigation of the evidence; (2) The decision and pronouncement of sentence; (3) The execution of the sentence.

If no goel appears, then the purchased possession must be lost by default. Then the sons of the lost race never can inherit the earth. Hence, John “wept bitterly”.

The Goel, or Redeemer has stepped forward. The purchased possession is now assured. He takes the Title Deeds of the alienated inheritance. “The Lion of the tribe of Judah” – c.f. Genesis 49:9. Jesus was born  of the tribe of Judah. The symbol of a lion indicates strength. Christ has conquered and won the victory; He has championed the cause of His people in the Great Controversy; and so, He is both worthy and able to take the scroll and to open its seals!

1) The Passover – in the Spring – when Jesus paid the redemption price.

2) The Day of Atonement – in the Autumn – when Christ represents our cause in the Investigative Judgement – these parallel with Daniel 7:13-14.

“Midst of the throne” – the focus is now on the Lamb. John had just witnessed the “Lion” as the Conqueror but he now sees a Lamb – such a dramatic contrast, which suggests His victory is not one of physical force but of moral excellence.

The fact that Christ took the scroll is because He has done what no other being in the universe can do – it is symbolic of His victory over evil. Jesus is the only name under heaven by which we may be saved – Acts 4:12.

The moment He takes the scroll – our destiny is in His hands – there is rapturous praise from the 4 living creatures and the 24 elders. “They will reign on the earth” – the promise of Jesus (Matthew 5:5) will be fulfilled when the earth is made new and the redeemed live and reign with Christ (Revelation 21:1-5).

IMPORTANT NOTE: Textual evidence attests reading of “them” and “they” in verses 9 and 10 is with reference to the redeemed. The seraphim need not to be redeemed. The pronouns “we” and “us”, which do not harmonize with the passage, have probably been taken by the KJV translators from the Latin Vulgate. It is also evident that the ones speaking in v.10 do not include themselves as “kings and priests”.

“According to the preferred reading, vs. 9-10 may be translated as follows: “Thou art worthy to take the book and to open its seals, because thou wast slain and didst purchase to God by thy blood out of every tribe and tongue and people and nation, and didst make them to our God a kingdom and  priests, and they shall reign upon the earth.’” – SDA Bible Commentary, Vol. 7, p. 773.

“Many angels” – in response to the testimony of the 24 elders and 4 living creatures, the hosts of the entire universe join in the acclamation, which suggests that God is vindicated before all the angels who had, in fact, witnessed all those accusations brought against Him by Satan. 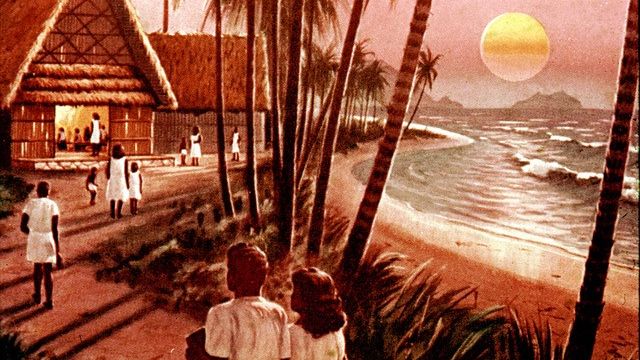 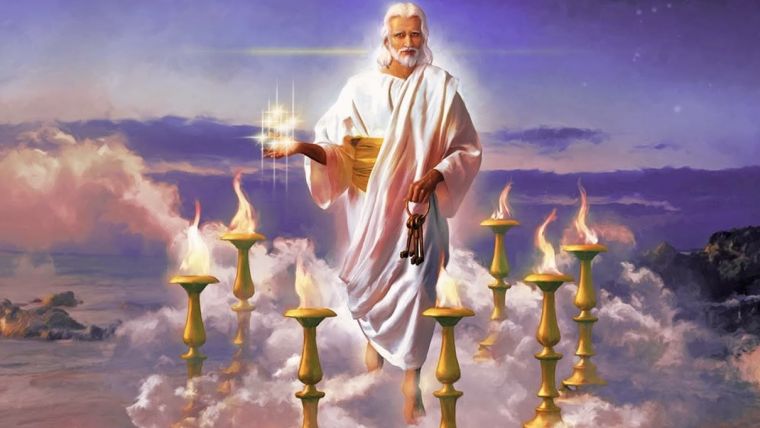